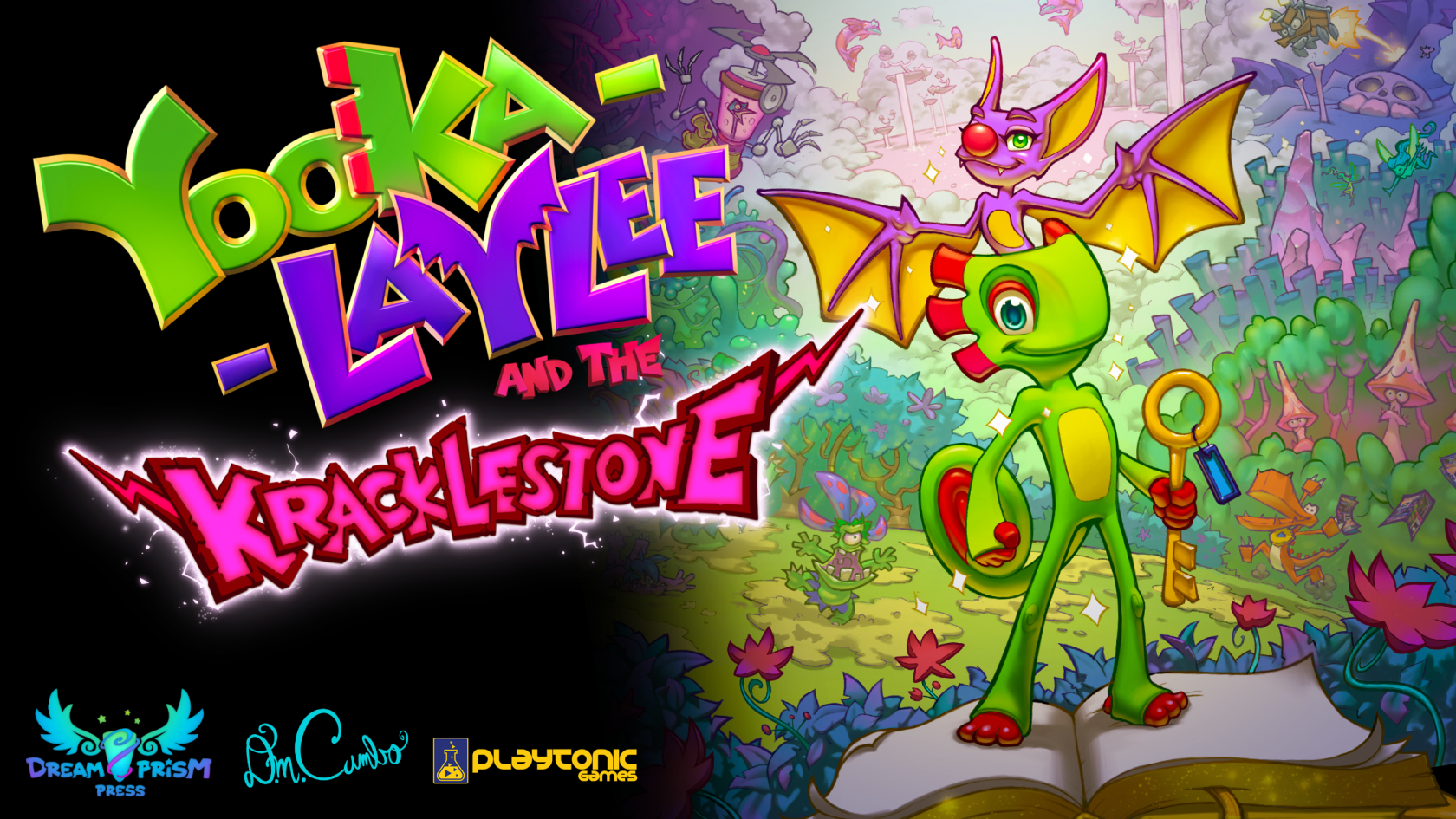 A brand new graphic novel based on the characters and world of Yooka-Laylee! NOTE: All prices are in US dollars.

Latest Updates from Our Project:

Are we really down to just TWO DAYS?!

Yeesh... guess we have to celebrate. After countless seconds puzzling over the best possible last minute contest idea, the good folks at Playtonic and I have settled on the perfect idea... to get your name drawn into a panel in the book. BUTT! It's not just any panel...

THAT'S RIGHT! You have the rare chance to have your name emblazoned onto a monster butt! (poor Rupert the Pantless... if only he'd remembered to wear pants)

In order to have a chance to win this disgusting honor you'll need to have a Twitter account. Simply follow both @DreamPrismPress and @PlaytonicGames and retweet THIS TWEET to enter to win! The contest period runs until tomorrow at 8am Pacific / 11am Eastern / 4pm GMT.

With just under ten days left in the campaign, we're getting close to the end! I've been working hard to expand press coverage outside of the games industry. Mostly, I've been reaching out to any and all contact in the comics sphere. I'm really pushing for us to reach that first stretch goal and I'm confident we can hit it!

I've also resumed work on the book coloring a bit earlier than expected. My coloring process does take awhile and I know it's going to be a challenging six months. So, I decided to get a little head start! I snapped a quick photo of the page I'm working on:

Which brings me to an important question!

I need to gauge which of two directions you'd like the post campaign updates to go. Should I...

(Option A) ...bring you along for the production process in detail at the cost of spoiling the story. Or...

(Option B) ...keep mostly quiet and keep the story/art a surprise?

Of course you can always ignore the progress updates. But I know it can be tempting to check out those sneak peeks. Let me know your thoughts below!

That's right, we're down to the last week of the campaign! To celebrate, here's a full look at the page I teased the other day:

Thanks for your feedback regarding backer updates post campaign. It's clear to me that people want to avoid spoilers so I'm going to try and keep you updated on progress without revealing too much. Take the work-in-progress page above, for example. I had planned to show a page from a later section of the book, but instead chose this one since it's close to the beginning of the book.

It's a hard balance to strike. It's important to show off the work to bring in more backers... but I don't want the whole story spoiled!

I think this is one of those times I'm supposed to ask you to really get the word out. Time is short for new backers and we have a fair ways to go to reach the first stretch goal. I'm still confident we can hit it!

Once again, thanks for your continued support. It means the world to me!

The campaign continues! We've blown past the main goal and we are well on our way to the first stretch goal. If reached, each copy of the book will receive sculptural de-embossing and transparent holographic foil stamping. It's hard to convey just how awesome this effect is in person. But there's another reason behind my desire to add these unique processes...

It's important! Little Golden Books distinct golden tape binding helps them stand out clearly from every other book on the shelf. I don't want to limit Dreamprism books to only one size/shape, but I'd like them to include some form of shared design element. This is where embossing/foiling comes into play.

I visit bookstores frequently, carefully noting how books are displayed. I've yet to see even a single book that shares my intended design. Should Dreamprism books ever be available in stores, I want to ensure they will stand out.

For those interested in learning more about embossing/foiling, the following will offer a deeper look into how its done.

Embossing typically involves pressing a male and female brass die together with paper between them. This causes indentations to appear in the paper. It is far simpler (and cheaper) to do a "single-level emboss." As I understand it, a laser carves into the brass die creating a single flat layer based on a digital reference file. The file simply uses black and white to indicate regions to be raised. This can be used for basic embossing purposes, such as text:

Far more complicated is a relief-style sculptured embossing. This requires a digital artist to create a 3D reference file that will be used to cut an actual relief sculpture out of a piece of brass. The results can be stunning, giving the appearance each copy has been hand-sculpted:

The effect of transparent holographic foil is hard to demonstrate because it's really only clearly noticeable in motion as light passes through the material. The idea is to retain and amplify the artwork beneath with a sort of rainbow/iridescent quality. I did my best to indicate this effect on the campaign page and video with a 3D render. Here's another example of it applied to a video game manual:

I wasn't able to find a single example anywhere clearly demonstrating the combined effect. This blu-ray cover design for Disney's Through the Looking-Glass was the closest I could locate. Our effect will be sharper and way more impressive :)

Our process will involve overlaying holo foil over the regions that will be embossed. BUT... here's the coolest part: this will be done directly onto the hardcover itself instead of a dust-jacket.

I explained that a male and female die press the paper to create the embossing, but how can be this be done on a thick cover stock? In order to accomplish this, the books use a thick spongy stock that is compressed by the brass die... creating the sculptural indent in the process! So cool!

I know that was wordy, but it's only scratching the surface of these awesome processes. Should we hit this first stretch goal, I'll be sure to record the production process for you to see!

Hopefully you now have an idea of the importance of this goal. It's not just about appearance (though it is gorgeous!!), it's also about creating a unique branding method. Kickstarter is aptly named. This project is not singular in nature--it's the start of something big...

Please continue to help spread the word so we can get the funding up to that 60k goal! I know we can reach it together!!

What an amazing Halloween surprise!

Thanks to your overwhelming support, the project has reached its main goal! Because of you, Yooka-Laylee and the Kracklestone will be made into a beautiful physical edition!!!

Thank you again for allowing my first campaign to be a success! I'm absolutely thrilled and humbled.